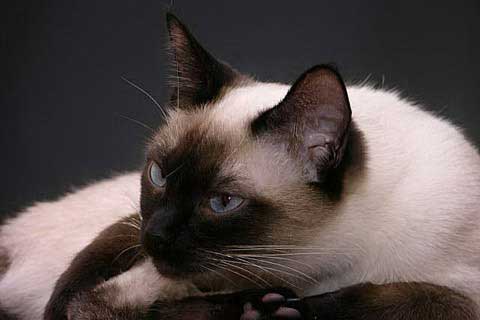 There is little dispute that the cats that were imported from Siam were broader in features than today’s Western Siamese. The International Cat Association (TICA), approved the look of the Old-Style Siamese to be shown as Thai in the Preliminary New Breed category, February 17, 2007. This approval was for a cat that represents the early 20th-century Siamese and can still be found in Thailand catteries (in Thailand this cat is called Wichien-Maat) and was shown beginning in 1993 in Europe. Around the world, registered Siamese and imported Wichien-Maats have played a pivotal role in the development of the Thai cat. Breeders internationally banded together to save the old-style look and promote the authentic cat, whose roots can be traced directly to Thailand and early Siam.
While many proponents will argue that the Thai is a Siamese, the distinction between these two cats lies in the commonality of relatives and the pointed gene. On careful examination, the evidence makes it apparent that the Thai bloodlines are not commonly seen in the Western Siamese lines of today, making the Thai a distinct breed. The Thai bloodlines are a conglomeration of Siamese and/or imported Wichen-Maat, but Thai cats maintain a look distinct from that of the Western show Siamese.
The preferred Thai cat is 100% imported from Thailand and has a pedigree establishing origination from Siam or bloodlines that are not commonly found in the Siamese pedigrees. The primary features of the Thai are that it is a moderately built cat, has a registered pedigree or imported documentation, has no domestic short hair ancestors, and does not carry the long-hair gene. The premise of the Thai cat is to help preserve the old look, yet provide a future that focuses on healthy diversified lines that genetically maintain the pointed (CSCS) gene and the authenticity and personality of this Old-Style Siamese.

In Thailand this elegant cat is known as the Wichien-Maat. For centuries it has been described in the book of the Tamara Maew, which has been transcribed by Martin Clutterbuck in the book Siamese Cats: Legends and Reality (2004). In the late 1800s, the Wichien-Maat was imported to England to develop into our beloved and popular show-style Siamese. Over the years, the Wichien-Maat has stayed true to its original breeding, which is still seen today in Thailand, and it remains a popular cat. While the Wichien-Maat, also known as the Thai, has common ancestry with the Western Siamese, generations of separate breeding of these two beloved cats have spearheaded the development of two distinct breeds.
In America, the show Siamese dominated in the show halls beginning in the 1950s, while a few select breeders worked diligently to maintain the look of the first imported Siamese from Thailand. It is well known that in the early 20th century more Wichien-Maat were imported from Thailand to England and from England throughout most of the Western world. As the new look increased in popularity, breeders in England, Europe, and North America unknowingly joined forces to preserve the look of the old-style Siamese first imported, and the cat still commonly seen today in Thailand as the Wichien-Maat.
In the early 1990’s a pioneering German woman introduced a Siamese cat that represented the classic look of the old-style Siamese to the show halls in Europe. Fondly called the cat “Thai.” Her enthusiasm and dedication to revitalizing the old look using Siamese bloodlines inspired many European breeders to begin breeding and showing a cat called “Thai.” As a result, numerous independent clubs developed their own breed standards so their members would promote these beautiful cats. Across the Atlantic in North America, a breeder worked passionately to preserve old bloodlines that were not seen in the show-style Siamese. This breeder went one step further and courageously went to Thailand to import new bloodlines. Together, American and European breeders began sharing bloodlines and working cooperatively through a small breed club called the Prestwick-Beresford Old-Style Siamese Breed Preservation Society (PREOSSIA). In 2006 a proposal went forward to recognize the Old-Style Siamese as “Thai” in The International Cat Association (TICA), and proponents of the old look met in Hannover, Germany, to introduce the Thai breed proposal.
The uniqueness of the Thai breed is that it not only is a moderate-looking pointed cat, but also has the potential to produce healthy and genetically diversified show cats that will likely continue inspiring generations of Siamese enthusiasts. The breed standard for the Thai allowed for the permissible out cross of both Western Siamese registered with major registries and imported Wichien-Maat. The distinctive characteristics that separated the Thai from the Western Siamese and Tonkinese played a major role in the acceptance of the Thai in the show halls.